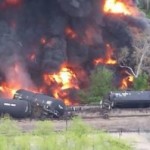 McAuliffe appointed the task force after the April 30 derailment of a train carrying crude oil in Lynchburg. Nobody was injured in the 17-car derailment. Three of the CSX cars carrying Bakken crude from North Dakota plunged into the James River and one caught fire, prompting a brief evacuation of parts of downtown Lynchburg.

The governor’s task force is co-chaired by Secretary of Public Safety and Homeland Security Brian Moran and Secretary of Transportation Aubrey Layne. Its first meeting is set for Wednesday afternoon at the state Capitol in Richmond.