UPDATE: US 220 repairs will run into January 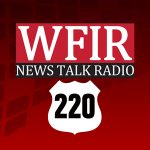 UPDATE December 19:  If you take US 220 between Boones Mill and Roanoke, you will have to wait until January before all lanes are open again near the Franklin-Roanoke County line. VDOT says the work to repair a large pipe under the median has presented many challenges, and the goal now is to have the work complete on the first week of the new year. For now, it remains one lane in each direction.

PREVIOUS: It will be at least into mid-December before repairs are complete along US 220 near the Roanoke-Franklin County line. A large pipe under the roadway’s median was damaged when the remnants of Hurricane Michael came through in early October, and getting to it has not been easy. For now, one lane remains closed in each direction at the work site. WFIR’s Evan Jones has the latest: