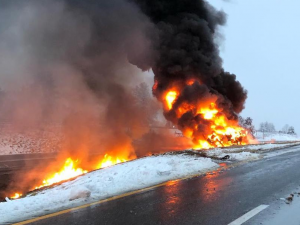 All lanes are open again on US 220 north of Fincastle in Botetourt County, more than two months after a fiery tanker truck accident forced the closure of the northbound lanes and disrupted traffic patterns while major repairs were underway. VDOT says there may be some southbound lane closures this week for paving and line marking, but again, all lanes are now open.

As for the repair cost, that is expected to top $1 million, and VDOT does not expect to bear the final expense. More from WFIR’s Evan Jones.

From VDOT: Route 220 in Botetourt County just north of Fincastle has been restored to a four-lane road as work to repair damage from an overturned tanker fire that occurred on February 20 is nearing completion. Two lanes of Route 220 in each direction are now open. Weather permitting, drivers on southbound Route 220 should expect some additional lane closures during daytime hours for paving and line marking this week. Work has been ongoing since February to replace a section of pipe that was destroyed and rebuild the northbound lanes of Route 220. Traffic previously had been shifted into a two-way pattern using the southbound lanes of Route 220.