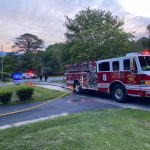 (from Roanoke Fire-EMS) At 7:52pm, Roanoke Fire-EMS was dispatched to the 3700 block of Three Chop Ln SW for a brush fire. The fire was marked under control within 10 minutes of dispatch. The cause of the fire and extent of damage is under investigation.

At 10:03am, Roanoke Fire-EMS was dispatched to the 300 block of Hershberger Rd NW for a fire alarm. Upon arrival units found smoke coming from an apartment of a multi-family assisted living facility. The fire was put out within 10 minutes of dispatch and contained to the apartment of origin. Other apartments filled with smoke and were checked for extension, no further extension was found. The fire was officially marked under control at 10:23am. No injuries were reported. The cause of the fire is under investigation.