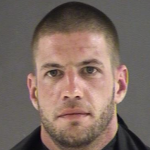 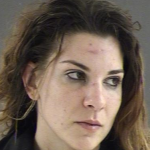 The Bedford County Sheriff’s Office says a Nelson County motorcyclist led them on a high-speed chase overnight that covered almost 90 miles after starting in Forest and ending about 70 minutes later in Bedford. 29-year-old Matthew Waltz of Roseland faces multiple charges including improper registration and driving without a license. His passenger, 29-year-old Alisha Carroll of Forest is charged with resisting arrest.

News release: At approximately 1:10 a.m. this morning a Bedford County Sheriff’s deputy observed a motorcycle with two occupants traveling south on 221 at high rate of speed. The motorcycle did not stop at the red light at the intersection of Perrowville Road. The deputy activated his emergency equipment and attempted to stop the motorcycle. The motorcycle attempted to flee through Bedford County and even entered Lynchburg City at one point. The motorcycle crashed on Greenwood Street in the Town of Bedford at 2:20 a.m. and the driver and female passenger fled on foot. Both were apprehended after a short search of the area. Speeds during the pursuit exceeded 90 miles an hour and covered 89 miles in length. Both subjects were transported to Bedford Memorial Hospital and were released after being medically cleared.

The driver was identified as Matthew A. Waltz, age 29, of Roseland. He was arrested and charged with felony elude police, driving suspended, no motorcycle license, improper registration of the motorcycle, no insurance, disregarding traffic signals and resisting arrest. The passenger was identified as Alisha B. Carroll, age 29, of Forest. She was arrested and charged with resisting arrest.

The Bedford County Sheriff’s Office was assisted in the pursuit by the Virginia State Police and Bedford Police Department.