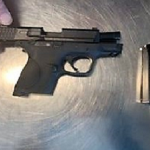 The TSA says a Lynchburg-area woman was nabbed with a loaded handgun in her carry-on bag yesterday at Roanoke-Blacksburg Regional Airport. Officials say the nine-millimeter weapon was loaded with 10 bullets. The woman was not named; police cited her on a weapons charge and confiscated the gun. This is the first such incident this year at ROA. Last year, there were six.

News release: ROANOKE – A Lynchburg, Virginia, area woman was stopped by the Transportation Security Administration with a loaded handgun at the Roanoke-Blacksburg Regional Airport checkpoint on Monday, April 8th. The TSA officer who was staffing the checkpoint x-ray monitor detected the 9mm caliber handgun inside the woman’s carry-on bag. The gun was loaded with 10 bullets.  TSA officials notified the airport police, which responded to the checkpoint, confiscated the handgun and cited the woman on a weapons charge. It marks the first gun that TSA officers have detected at the airport so far this year. In 2018, six guns were caught at the airport’s checkpoint. The woman is a resident of Forest, Virginia, in Bedford and Campbell counties.

As a reminder, individuals who bring firearms to the checkpoint are subject to federal civil penalties of up to $13,000. This applies to travelers with or without concealed gun carry permits because even though an individual may have a concealed carry permit, it does not allow for a firearm to be carried onto an airplane. A typical first offense for carrying a handgun into a checkpoint is $3,900. The complete list of penalties is posted online here: https://www.tsa.gov/travel/civil-enforcement.