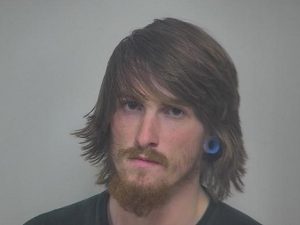 State police have charged a 20-year-old Lexington man with hitting a trooper last week in a hit and run incident on Route 11 in Botetourt County. Troopers say Hunter Ruley was arrested after police learned he was trying to sell wheels and tires from the truck on line. Charges include Felony Hit and Run.

The crash occurred at 9:56 p.m. while Senior Trooper R.E. Tackett was investigating a crash with another vehicle and a bear.  The trooper was entering his vehicle from the passenger side, when he was struck by a 2004 Chevrolet pickup truck.  The Virginia State Police was able to use the video system in the trooper’s vehicle to obtain a description of the vehicle that struck the trooper.

Shortly after the crash, Ruley posted on social media he was selling a set of 4 oversize wheels and tires from a 2004 Chevrolet.  Investigators received information on the posting from a citizen, and using the pictures provided by Ruley on the site; was able locate the truck at a residence in Rockbridge County.

Troopers seized the vehicle and Ruley was later arrested at that location.

PREVIOUS: The Virginia State Police is investigating a crash in which a trooper was struck. The crash occurred at 10:03 p.m. on Friday (Dec 20) 0n route 11 in Botetourt County. A white Dodge pick-up was traveling north on Route 11, when the pickup struck the trooper on the right side of the of the State Police vehicle. Damage to the suspect vehicle will be on the right side and will include the right headlight and fender. Witness’ at the crash scene stated the pick-up accelerated as it left the scene after striking the trooper and his vehicle. The trooper was transported to Stonewall Jackson Hospital for non-life threatening injuries.