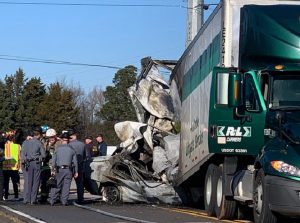 UPDATED NEWS RELEASE: Virginia State Police Senior Trooper W.L. Ferguson is investigating a two-vehicle crash in Pittsylvania County. The crash occurred Dec. 8, 2020 at 12:45 p.m. on Cane Creek Parkway at Tom Fork Road.
A 2004 Toyota Camry was traveling on Tom Fork Road when it failed to stop for the posted stop sign and continued onto Cane Creek Parkway where it struck a tractor-trailer. The impact of the crash caused the Toyota and the trailer of the commercial vehicle to catch fire.
The driver of the Camry, Shirley J. Scott, 61, of Milton, N.C., died at the scene.
The driver of the tractor-trailer was not injured in the crash.

PREVIOUS: At 12:48 p.m. Tuesday (Dec. 8), Virginia State Police responded to a two-vehicle crash in Pittsylvania County. The crash occurred on Cane Creek Parkway at Morgan Olson Way involving a tractor-trailer and a car. [This is east of Danville in the Ringgold area.] The impact of the crash caused the car and trailer to catch fire. There is one confirmed fatality. The crash remains under investigation.