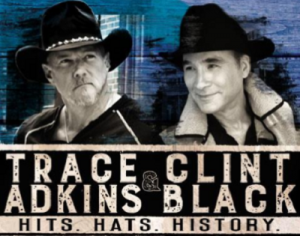 Two long-time, well-known country music stars are coming to the Salem Civic Center. Trace Adkins and Clint Black will perform there on June 7th. Tickets go on sale this Friday.

News release: Country Music icons Clint Black and Trace Adkins will make a triumphant return to the stage later this spring when their much-anticipated Hits. Hats.History. tour makes a stop at the Salem Civic Center on Friday, June 7. Adkins last played in the arena in 2017, and this will mark Black’s first appearance in Salem since 2007, when he headlined the city’s inaugural Star-B-Q concert at the Downtown Farmers Market. “Trace and I toured together back in the 90s and I’m really looking forward to sharing the stage with him again,” says Black. “He’s a lot of fun and a real pro.” The Hits. Hats. History. tour kicks off May 2 in Charlotte and the two hitmakers will be joined on their Salem stop by Terri Clark. In addition, this tour coincides with the 30th anniversary of the release of Black’s iconic album “Killin’ Time” in 1989. The triple-platinum recording is still considered one of the most influential albums in Country Music history. “It’s been a few years since Clint and I shared the stage,” says Adkins. “Since then, we have both been fortunate to have added a few more hits and hats to our collection. I am looking forward to this.” Tickets for the Hits. Hats. History. tour at the Salem Civic Center go on sale Friday, March 22, at 10 a.m. Reserved seat tickets are priced at $39.50, $59.50, $69.50, and $124.50. Preferred parking is available for $5. Tickets can be purchased at the Salem Civic Center Box Office Monday through Friday from 10 a.m. – 6 p.m . and on Saturday from 10 a.m. – 2 p.m. They also can be purchased by phone at 800-745-3000 or through Ticketmaster.com. Presale tickets will be available through Ticketmaster.com this Thursday, March 21 at 10 a.m. for the artist’s fan club members and for those who are part of the Salem Civic Center email club.