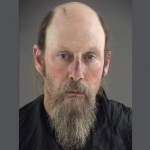 UPDATE: At 1:50 a.m. this morning Mark Edwin Turner, age 56, was taken into custody and charged with felony malicious wounding, the use of a firearm in commission of a felony and possession of a firearm by a felon. He is being held in the Blue Ridge Regional Bedford Adult Detention Center on no bond.

PREVIOUS: Law enforcement has taken the  suspect  into custody following a short stand off.From Bedford County Sheriff’s Office: At 11:30 p.m. Monday night, Bedford County 911 received a call from Shephard Lane reporting gun shots. Law enforcement responded and found three people outside of the residence with what appeared to be non life-threatening injuries. All three individuals were transported to a hospital. The suspect barricaded himself in the residence. At this time law enforcement has the shooter contained in the home and negotiations have begun with him.