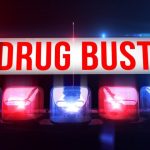 NEWS RELEASE: Three Roanoke residents were arrested Wednesday on federal drug and gun charges during the execution of a series of search warrants at residences in the City of Roanoke, United States Attorney Thomas T. Cullen announced today. The arrests were made as part of the Western District of Virginia’s ongoing Project Safe Neighborhoods (PSN) initiative to reduce gun and violent crime.

“We are committed to working with the Roanoke Police Department to reduce violent crime, unlawful gun possession, and the distribution of deadly substances like heroin and fentanyl in this community,” U.S. Attorney Cullen stated today.  “With the help of our local partners across the district, we have significantly increased, over the past year, the number of federal cases involving firearms, violence, and drug trafficking, and will continue these critical initiatives in the Roanoke Valley to make our community safer.”

Arrested and charged this week were Jarod Sylvester Alston, 26, Antonio Lemar Waddell, 29, and Dwayne Parnell Leftwich, 31.  Waddell and Alston were charged on a criminal complaint with conspiracy to distribute controlled substances including quantities of methamphetamine, heroin, and fentanyl.  Leftwich currently faces a firearms-related charge.

The investigation of the case was conducted by the Bureau of Alcohol, Tobacco, Firearms, and Explosives (ATFE), the Drug Enforcement Administration, the Roanoke City Police Department, and members of the region’s High Intensity Drug Task Areas (HIDTA) program.  Assistant United States Attorney Kari Munro is prosecuting the case for the United States.

This case was brought as part of Project Safe Neighborhoods. Project Safe Neighborhoods is the centerpiece of the Department of Justice’s violent crime reduction efforts.  PSN is an evidence-based program proven to be effective at reducing violent crime. Through PSN, a broad spectrum of stakeholders work together to identify the most pressing violent crime problems in the community and develop comprehensive solutions to address them. As part of this strategy, PSN focuses enforcement efforts on the most violent offenders and partners with locally based prevention and reentry programs for lasting reductions in crime.

A criminal complaint is only a charge and not evidence of guilt.  The defendants are entitled to a fair trial with the burden on the government to prove guilt beyond a reasonable doubt.