Third man guilty in beating of black man in Charlottesville 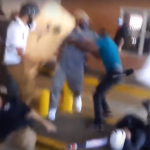 CHARLOTTESVILLE, Va. (AP) – A third man has been found guilty in the beating of a black man who was left severely injured the day of a white nationalist rally in Charlottesville, Virginia.
News outlets report that 19-year-old Daniel Borden of Ohio entered an Alford plea Monday to a charge of malicious wounding in the attack on DeAndre Harris.
The plea means Borden did not admit guilt but acknowledged that prosecutors had enough evidence to convict him.
The attack on Harris in a parking garage Aug. 12 by a group of men was captured in photos and videos widely shared online.
Borden’s plea follows the conviction of two other men. A fourth man is awaiting trial.