The Chimes are coming to Market Square on Friday 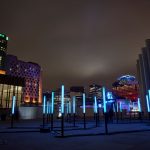 Downtown Roanoke Inc. has announced an innovative, interactive art exhibit in Market Square debuting this Friday. WFIR’s Ian Price has more:
From Downtown Roanoke Inc. news release – Downtown Roanoke, Inc., with support from ValleyStar Credit Union, is excited to bring Chimes, an innovative, interactive art installation to Market Square, in the heart of Downtown Roanoke. The public is invited to see, explore, and interact with Chimes Roanoke from January 31 – February 29. The installation is free, open to the public, and appropriate for all ages. “Roanoke has never had an interactive art installation like this before,” said Tina Workman, President and CEO of Downtown Roanoke, Inc. “ Chimes refers to the concept of chaos theory, in which a small action produces a large impact. Inspired by the scientific concept of strange attractors, a random disorder is set up thanks to 30 lights and 8 speakers
that come to life at the slightest swaying of the chimes. At rest, without any interaction, the installation is in a state of equilibrium. But a simple gust of wind, or an interaction with a visitor, transforms the entire ambiance and generates new light and sound patterns. Every chock between the Chimes’ bells disturbs the audiovisual environment and can generate divergent
evolutions. The results become unpredictable and chaotic.