Texas Tavern will remain open after midnight despite curfew 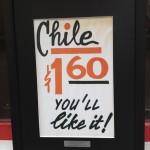 In case you were wondering after the Governor announced a midnight to 5am curfew starting Monday – the Texas Tavern in downtown Roanoke will still be open all night. Owner Matt Bullington reads from the Governor’s revised order issued yesterday and says its ok. Bullington notes that the Texas Tavern hasn’t seated anyone inside since March. He also says lawmakers need to agree on aid packages for small businesses – like local eateries – or more will go out of business: