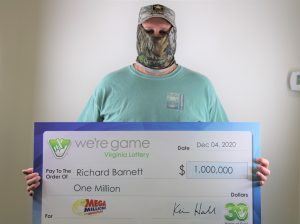 NEWS RELEASE: Richard Barnett’s wife had some interesting news. She had heard Triangle Market at 3631 Radford Road in Christiansburg sold a Mega Millions ticket that won $1 million, and the winner had not yet come forward.

She had bought a Mega Millions ticket at that very store the day before the drawing.

“I told her not to get her hopes up,” the Christiansburg man later said.

It turns out that was indeed the winning ticket. The ticket she bought for him matched the first five numbers in the November 17 drawing to win Mega Millions’ $1 million prize. Had the ticket matched the sixth number, the Mega Ball number, they would have won a jackpot estimated at $176 million.

The winning numbers were 8-13-35-46-68, and the Mega Ball number was 16. This was the only ticket in the nation to win the $1 million prize in that drawing. The store receives a $10,000 bonus for selling the million-dollar winning ticket.

Mr. Barnett said they have no immediate plans for the winnings.

“I’m still the same person I was before,” he told Lottery officials as he claimed the prize.

Mega Millions drawings are held Tuesday and Friday nights at 11 p.m. Drawings are broadcast on TV stations across Virginia and streamed live at www.valottery.com. The odds of matching the first five numbers in Mega Millions are 1 in 12,607,306.