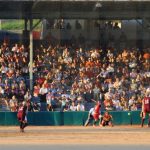 Its the only stop the team will make in Virginia next year – the USA Olympic Softball team is coming to the newly-renamed Billy Sample Field at Kiwanis Park in Salem next June 25. Team USA will play the “Salem All Stars,” a squad of players from local college and universities. That game is less than a month before Team USA heads to Tokyo for the Olympics, which has now restored softball to the competition. Tickets go on sale tomorrow. Team USA last played in Salem in 2008.