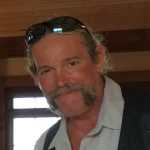 Blue Ridge Parkway rangers are searching areas near the Thunder Ridge parking area in Bedford County for a 63-year-old man missing for weeks. The National Park Service says a motorcycle was first seen parked there October 26, and further investigation revealed that James Hogue of Bristow in northern Virginia was last seen two weeks earlier when the Roanoke County Sheriff’s Office contacted him. It is not clear why the sheriff’s office was in communication with Hogue.

NEWS RELEASE: Blue Ridge Parkway rangers are searching for a 63 year-old male near the northern end of the Blue Ridge Parkway. James Albert Hogue, of Bristow, Virginia, was last seen wearing a black leather jacket and blue jeans. He is 6’1,” has brown eyes, and a scar on his right arm. A missing person’s report has been filed with Bedford County, Virginia.

Mr. Hogue’s unoccupied motorcycle was first noticed at the Thunder Ridge Parking Area, near Milepost 75, on October 26, 2019. It is not uncommon for vehicles to be left at parkway overlooks for extended periods while owners are on a backcountry hike. However, after two days, Parkway law enforcement rangers began an investigation and learned that Mr. Hogue was last seen two weeks prior when Roanoke County Sheriff’s Office contacted him.

Please contact the Parkway’s Dispatch Center at 828.298.2491 or the National Park Service Investigative Services Branch Tip Line at 888.653.0009 to report any information regarding Mr. Hogue or his whereabouts.