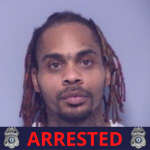 UPDATE: Roanoke Police have arrested Christopher A. Withers, 33 of Roanoke, and charged him with malicious wounding, use of a firearm in commission of a felony, and possession of a firearm by a convicted felon.  Throughout the course of the investigation, Mr. Withers was identified as a suspect. He was located earlier today at a residence in Roanoke and taken into custody without incident. There are no further details to share at this time and this remains an ongoing investigation.

(previously) On March 29, 2022 at approximately 10:30 p.m., Roanoke Police were notified by City of Roanoke E-911 Center personnel of a person with a gunshot wound in the 600 block of Orange Avenue NE. Responding officers located an adult
male victim with what appeared to be non-life threatening injuries at a business in the area. Roanoke Fire-EMS transported the man to Carilion Roanoke Memorial Hospital for treatment.