Susan Bro gets support at trial from Gil Harrington 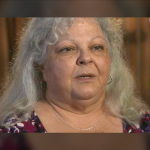 Susan Bro became a national figure after the death of daughter Heather Heyer at the Unite the Right rally in Charlottesville last year. During the just-concluded murder trial for James Fields Jr., the mother of Morgan Harrington offered support in the courtroom. WFIR’s Gene Marrano spoke with Gil Harrington about that: