Storms knock out power out to thousands; some schools closed Monday

A powerful storm caused extensive damage in parts of the Lynchburg and Danville areas late Saturday afternoon and early Sunday evening. In the Lynchburg region, close to 19,000 Appalachian Power customers were without service at one point, and many Lynchburg-area schools are closed Monday. Along with significant damage to some buildings, downed trees and power lines are forcing road closures in parts of Lynchburg and nearby Campbell County.

The Danville area is also reeling from the severe weather. City Manager Ken Larking has declared a local state of emergency. Many Danville residents are without power, and officials there say outages may last into Tuesday. 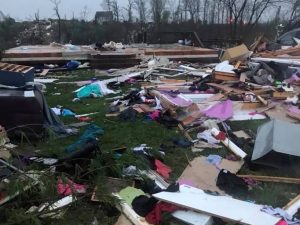 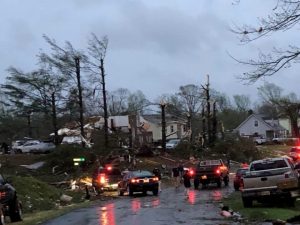 While damage in some areas appears consistent with a tornado, there is no official word yet whether any of these storms were in fact tornadoes or whether the damage was caused by straight-line winds. It is typical in such situations for National Weather Service personnel to make in-person visits to determine an official evaluation. As of late Monday evening, there are no reports on serious injuries.

From State Police: Virginia State Police troopers and supervisors have been responding throughout the evening to communities across western and Southside Virginia, as well as the Lynchburg region, that have been impacted by Sunday’s severe storms. Fortunately, at this time, only minor injuries are being reported in those communities impacted by the storms. State police have also been busy responding to reports of downed trees and power lines across numerous roadways. For their safety, Virginians are reminded to never come in contact with downed power lines. Utility crews are responding as quickly as they can to attend to downed lines.