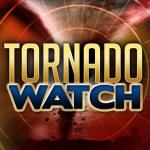 The National Weather Service has issued Tornado and Flash Flood Watches until late Sunday night for areas that include Roanoke, Salem and surrounding counties. A watch does not mean a tornado or flash flooding is imminent; it does mean that conditions are present that might lead their creation.

From the National Weather Service:

IN VIRGINIA THIS WATCH INCLUDES 26 COUNTIES IN CENTRAL VIRGINIA:

FLASH FLODO WATCH: A strong cold front will approach the area from the west this afternoon and pass across the region tonight. Deep moisture ahead of this boundary will lead to bands of showers and heavier thunderstorms this afternoon and early evening. The potential exists for 1 to 3 inches of rainfall with locally higher totals along the southern Blue Ridge, the far western ridges and into the foothills and Roanoke Valley.

A flash flood watch is in effect until midnight for areas in Virginia that include the New River Valley counties of Pulaski, Montgomery and Giles Counties, as well as Craig, Roanoke, Franklin, Henry, and Patrick Counties.

Bands of showers and thunderstorms could produce 1 to 3 inches of rain, with locally higher totals along the eastern slopes of the Blue Ridge. Excessive rainfall may lead to flash flooding in urban areas such as Roanoke and Martinsville, and along creeks, streams an low-lying areas.

PRECAUTIONARY/PREPAREDNESS ACTIONS: A Flash Flood Watch means that conditions may develop that lead to flash flooding. Flash flooding is a VERY DANGEROUS SITUATION. Remember…TURN AROUND…DON`T DROWN! You should monitor later forecasts and be prepared to take action should Flash Flood Warnings be issued.