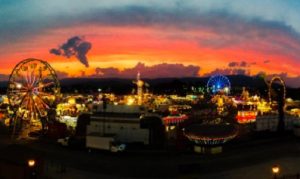 (update 3pm) Salem Fair officials are announcing increased security measures starting today through the closing date of July 11th, after last night’s shooting incident that left two wounded. Children under the age of 18 must now be accompanied by an adult parent or guardian with a valid I.D. while on the fairgrounds. Every entrant will be subject to bag checks and electronic metal detecting wands at gate entry. The entry gates will now close at 10-pm, although the fair will remain open until 11.
Salem Police say the the teenager charged with shooting two people last night at the Salem Fair did not know either victim — and the victims did not know each other. There is no indication offered yet as what might have led to the shooting, one that led to an early closure on the fair’s first night. Police say one gunshot victim was released after hospital treatment, and the other is now in stable condition. So far, there is no word on how that might impact its schedule or operations in coming days.
UPDATED SALEM POLICE NEWS RELEASE: The juvenile responsible for Wednesday night’s shooting at the Salem Fair has been charged with Two Count of Malicious Wounding, Two Counts of Using a Firearm in the Commission of a Felony and Carrying a Concealed Weapon. The suspect, who is under the age of 16, is being held at the Roanoke Detention Center. One of the victims was a juvenile and the second victim was an adult male. The victims were not acquaintances and neither one of them knew the shooter. Both victims were transported to Carilion Roanoke Memorial Hospital by Salem Fire and EMS personnel last night. The one with non-life-threatening injuries was treated and released, while the other remains hospitalized in stable condition. The incident occurred at 8:57 p.m. on Wednesday night. Officers were patrolling the midway when they heard the shots. They quickly observed a suspect with a gun, chased the individual down and immediately took him into custody. The Fair, which is normally open until 11 p.m., was closed for the night. This crime remains under investigation and additional charges are pending. Salem Police are asking that any eyewitnesses please take the time to provide an account of the incident by calling 375-3083. Contact: Lt. Greg Haston City of Salem Police (540)375-3083-officeghaston@salemva.

PREVIOUS: Salem Police say two people were taken to the hospital last night following a shooting on the opening night of this year’s Salem Fair. As a result, the fairgrounds were closed and fairgoers were sent home. Authorities say one of the victims sustained serious injuries, while the other victim’s injuries are said to be non life threatening. A suspect said to be under the age of 16 was taken into custody shortly after the incident.

NEWS RELEASE: The Salem Police Department responded to the sound of gunshots at the Salem Fair on Wednesday night at approximately 8:57 p.m. Officers, who were patrolling the midway when the shots were heard, observed a suspect with a gun, chased the individual down and took him into custody. The suspect is a juvenile male under the age of 16.The officers also discovered two male victims with gunshot wounds. Both were transported to Carilion Roanoke Memorial Hospital by Salem Fire and EMS personnel. One victim suffered serious injuries in the incident, while the other had non-life-threatening injuries. This crime remains under investigation, and Salem Police are asking that any eyewitnesses please take the time to provide an account of the incident by calling 375-3083. The Salem Fair, which is normally open until 11 p.m., closed shortly after the incident.

PREVIOUS: Salem Police say two gunshots were fired on the opening night of this year’s Salem Fair. As a result, the fairgrounds were closed and fairgoers were sent home. There are no initial reports of any injuries, and there are no further details immediately available. Reports from the scene indicate multiple police agencies are present to investigate the gunshots.