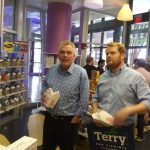 On a campaign swing through downtown Roanoke this afternoon the Democratic candidate for Governor – Terry McAuliffe – stopped by The Candy Store at Center in the Square, touting what he said were ways funds from the American Rescue Plan Act, passed on the Biden Administration’s watch, helped keep small businesses solvent during the latter stages of the pandemic. McAuliffe also said 7 million Virginians benefitted in some way from the American Rescue Plan.