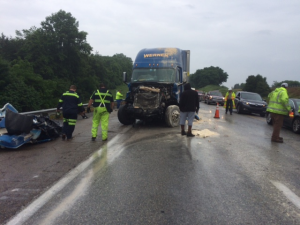 NEWS RELEASE: State Police are on the scene of several crashes at the 196 southbound mile marker on Interstate 81. The first crash occurred at 8:24 a.m. and two other crashes occurred in quick succession after the first. There were a total of 10 vehicles involved. There were several non-life threatening involved and those injured were taken to Stonewall Jackson hospital in Lexington.

Interstate 81 is blocked at this time and there will be one lane open shortly. There were three tractor trailers involved, and there were no hazmat issues. The crash remains under investigation.