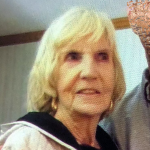 WEDNESDAY UPDATE: Searchers have found the body of an 83-year-old Bedford County woman who had been missing for five days. The body of Lina Toot was discovered this morning in a creek not far from her Moneta-area home. Sheriff Mike Brown made the announcement this afternoon:

Brown says investigators still have some work ahead in efforts to determine the exact circumstances surrounding the death, but he did not suggest there was anything suspicious. Lina Toot had last been seen alive last Thursday night, and the search began the next afternoon.

From the Bedford County Sheriff’s Office: This morning at approximately 9:30 a.m., members of the Bedford County Special Operations Team located Lina Toot in a stream approximately a half mile from her home.  Search teams had checked this area several times last weekend. However, due to the heavy rain the streams were flowing outside their banks making it impossible to thoroughly search the waters.  After reviewing the search efforts from over the weekend it was decided to put search teams back in the area due to the water receding.

This remains an ongoing investigation; however there is no reason to suspect any nefarious activity. Her body will be transported to the Chief Medical Examiner’s Office to determine the cause of death.

All the first responders are very disappointed that we were not able to locate her alive, but are grateful that we can give the family some resolution and closure in their tragic loss. We are grateful for the support the family showed the first responders during these last several days. We are also thankful for all the individuals and agencies that assisted in this search. The Moneta Fire Department, Bedford County Fire and Rescue personnel, Virginia State Police, Norfolk and Southern, Scruggs Dive Team, Virginia Department of Emergency Management and the dedicated search and rescue teams from all over Virginia who exhibited extraordinary determination and professionalism.

Finally, we want to express our gratitude to the members and congregation of the Diamond Hill Baptist Church for opening their doors to us and give us a place to work and to the community members, who have been overwhelming in their efforts to provide us with food, water and words of support. We at the Bedford County Sheriff’s Office could not do our job without the outstanding teamwork and relationships we have with citizens of Bedford County

SUNDAY UPDATE from the Bedford County Sheriff’s Office: The search for Lina “Pat” Toot continued on Sunday with no success. Over 130 searchers were involved on Sunday. Effective tomorrow, Monday, search efforts will be scaled back, however K-9 searches and air searches will continue. The ground search will continue based on the results of the next several days. Family members advise that Mrs. Toot answers to middle name “Pat”.

SATURDAY: The search continues for Ms. Toot. Plans are to continue searching until 10:00 p.m. tonight. Over 100 people have been involved in the search today. Search will resume first thing in the morning in the event she is not located this evening.

FRIDAY:  At 1:35 p.m. today, Bedford County 911 received a call reporting Lina Toot, a 83 year old female missing from Toot Boulevard in Moneta. The caller stated that when he arrived at the home the door was standing open. He also said the woman lives alone and she was last seen at 8:00 p.m. last night. She is a white female, 5’ 3”, 113 lbs. and has gray hair. Bedford County Sheriff’s deputies, a K-9 from the Franklin County Sheriff’s Office along with volunteers from Bedford County fire and rescue are on the scene searching at this time. Anyone with information on her possible whereabouts is asked to call 911 or 586-7827.