Salem Sox will also be known as the “Beer Mongers” 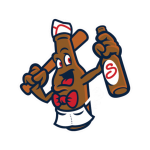 Minor League baseball teams are often known for their unusual nicknames – the Sod Poodles, Lugnuts, Jumbo Shrimp and so on. Now the Salem Red Sox are joining that tradition – at least for 9 games this year as WFIR’s Gene Marrano reports:
(earlier Red Sox release) The Salem Red Sox have “draughted” an alternate appearance for the 2019 season. Beginning May 2, the team will take the field every Thursday as the Salem Beer Mongers in a nod to the growing craft industry. General Manager Allen Lawrence added, “Craft beer has taken off here locally and across the entire state with the number of breweries increasing for less than 50 in 2011 to over 200 today. We thought it was appropriate to recognize the growth of the craft beer industry and the importance that it plays in our local economy.”