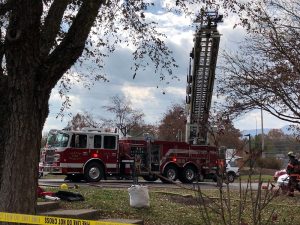 A Salem woman is in critical condition after fire erupted yesterday in her apartment, and she is probably alive only through the efforts of Salem firefighters. Fire officials say personnel responding to the Rutledge Drive apartment found the victim unresponsive inside, and it was their efforts that brought a pulse back. Two cats died in the fire, which is blamed on improper disposal of smoking materials.

NEWS RELEASE: Yesterday, the Salem Fire & EMS Department responded to a working apartment fire. First arriving units found a fire in a first-floor apartment. Truck 1 (A-Shift) personnel initiated a primary search and quickly located an unresponsive female resident in the apartment. The resident was removed from the apartment and Truck 1 personnel began resuscitation efforts. It took only seven minutes to locate and remove the resident from the apartment. Firefighters were able to bring back a pulse and the resident was transported to Roanoke Memorial Hospital in critical condition. Firefighters were able to bring the fire under control in 14 minutes and keep it from spreading to other apartments. Two cats were also rescued from the apartment, but unfortunately did not survive. Our thoughts and prayers are with the resident and everyone affected by the fire.