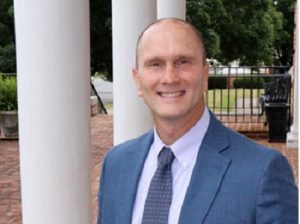 The Salem School Board didn’t take long or have to look very far to select its next superintendent, naming Curtis Hicks at last night’s meeting. Hicks has been the assistant superintendent in Salem since 2014. He succeeds Alan Seibert, who retires September 30.

NEWS RELEASE: Curtis Hicks has been named the new Superintendent of Salem City Schools, effective September 30. Dr. Hicks has served as an assistant superintendent for the division since 2014,and he has been a central office administrative employee since2007. His appointment was unanimously approved by the School Board at the conclusion of a specially called meeting that wrapped-up this Tuesday morning.“ I appreciate the confidence the board has shown in me, not just with this appointment, but throughout my time in Salem,” says Hicks. “The board has always been supportive of the initiatives I have brought before them, and I am proud to say we already have an outstanding working relationship. ”Hicks will replace current superintendent, Dr. Alan Seibert, who is retiring after 30 years of service to the school division. The board requested internal applications and interviewed the candidates who formally applied.
School Board Chairman, David Preston, says Hicks’ extensive and diverse administrative experiences, and his wealth of institutional knowledge made him the top choice.“ We have an outstanding track record in Salem of hiring quality educators, identifying leaders and then grooming them for moments like this,” says Preston. “Curtis is a dynamic leader who relates extremely well to students, teachers and parents. He has the unique ability engage these groups, even when they are at odd sor struggling, and find the common ground that ultimately benefits the child.” Hicks knows firsthand how children can benefit from a quality education. He and his wife, Marcia, have three children who are products of the Salem School Division. Garrett is a University of Virginia graduate, who will return to UVa this fall to pursue his master’s degree. Their middle child, Meredith, is a rising 2ndyear student at Virginia, and their youngest child, Will, who will be a senior at Salem High School this year, has accepted an invitation to play lacrosse at the University of Lynchburg after he graduates. “Our family will be forever grateful for the time and energy that the teachers in Salem invested on our children,” says Hicks. “They were given opportunities that continue to inspire them today.”

Hicks grew up on a farm in Alleghany County and was a highly recruited student-athlete for the Alleghany Mountaineers. He signed scholarship papers to play football with the Virginia Cavaliers during the George Welsh era and while in Charlottesville he made his mark on the field and in the classroom. “Athletics and my rural roots taught me the importance of teamwork and recognizing the value that each person possesses,” he says. “All of the coaches and teachers who saw something in me when I was young and those who later created opportunities for me in the early stages of my career are the reasons that I have been given this opportunity.” The work ethic that his parents and coaches instilled in him, helped Hicks earn his bachelor’s and master’s degrees from Virginia in 1995. He was a member of the ACC Academic Honor Roll from 1992-1995 and he was awarded the national “Hitachi Promise of Tomorrow” teaching scholarship after his senior year.

“After graduation, I was hired to teach and coach at Northside Middle School and after just my second year of teaching, I was encouraged by my principal and the director of human resources to pursue a career in administration,” he says. “They recommended me for the Principal Preparation Program at Virginia Tech.” He earned his Education Specialist degree and completed Tech’s Educational Leadership program in2000, but Hicks actually began his career in administration long before the requirements were completed. “Even though I had not completed the program and did not yet hold an administrative endorsement, I was hired to be an assistant principal at Floyd County High School,” he says. “Floyd County is where I learned how important empathy and compassion are when dealing with students, parents, and staff who are going through difficult situations. I also learned the importance of creating relationships based on genuine care and concern for students and their families.” After two years in Floyd, Hicks returned to Roanoke County as served as an assistant principal at both Hidden Valley and Cave Spring High Schools for the next two years.
In 2003,at the age of 30,he was named the principal of Glenvar High School. “This was an awesome responsibility that I took very seriously,” says Hicks. “I wanted to do whatever I could to make sure that each one of the 600 students reached his or her full potential, and that both the students and their families had a positive experience with our school.” While at Glenvar, Hicks implemented several impactful programs including a study program that reduced failing grades and significantly improved student achievement. He also implemented the Highlander Day of Caring initiative that taught students the importance of community service. “Leaving Glenvar was a difficult decision,” he says. “At that time, I wanted to be more involved with my children’s education and extracurricular programs, and I knew I could have an impact on even more students by implementing and improving programs in grades K-12.” Hicks joined Salem Schools in 2007 as the director of secondary instruction. In 2014, he was promoted to assistant superintendent for instruction and since Mike Bryant’s retirement in 2017, he has served as the division’s only assistant superintendent. “Dr. Seibert entrusted me with many responsibilities, and I am very proud of the strides we have made when it comes to the division’s alternative education and recovery programs, the Random Drug Testing Program for student-athletes, our job shadowing and apprenticeship programs and our use of grant funding to support innovation.”
Hicks earned his doctorate in educational leadership from the University of Arkansas in May of 2020. Since the start of the COVID-19 pandemic, he has served as the point person for the school division handling interactions with health department officials, school staff members, community leaders and parents. “As a school division and a community, we are still facing lots of uncertainty related to the pandemic,” says Preston. “The appointment of Dr. Hicks should give our teachers and our parents a sense of security and reassurance. He is a natural leader, who knows our schools and our personnel as well as anyone.”