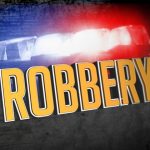 (from Roanoke County PD) Just before 1:00 today an employee at Pinnacle Bank, in the 4000 block of Challenger Avenue (Bonsack area) called to report a robbery. Within 20 minutes, Roanoke County Police had the suspect in custody.  An officer located the suspect vehicle on Orange Avenue and attempted to make a traffic stop. The suspect continued onto I-581 South where a pursuit ensued.
The suspect exited near Southern Hills Drive, traveling along side streets and North onto Franklin Road. He eventually came to a stop at the end of a nearby residential street in Roanoke City. The suspect exited the vehicle and was taken into custody without incident. An undisclosed amount of money was recovered at the scene. There were no injuries to bank employees, police officers or the suspect.  This incident is still under investigation.