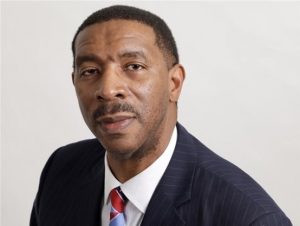 Roanoke City will have a new Deputy City Manager this summer. Clarence Grier was most recently Deputy County Manager in Guilford County, North Carolina — the Greensboro area. According to He left that position earlier this year; according to the Guilford County-based Rhino Times, Grier was relieved of his position after a new majority took control of the county’s board of commissioners. Grier will succeed Sherman Stovall, who will retire in June.

NEWS RELEASE: Clarence G. Grier has been named Deputy City Manager for the City of Roanoke.  Following the retirement of Deputy City Manager Sherman Stovall in June 2021, Grier will assume the responsibility of managing and directing City departments, public safety agencies, and programs based on general direction and policy of the City Manager and City Council.

Grier and his wife have family in Roanoke, and he secured his first job out of college here more than 30 years ago.  He was a high school and college basketball star, having been drafted by the NBA’s Houston Rockets in 1987.

“Finding someone to carry on the incredible work of Sherman Stovall, who is retiring in June, was no easy task,” said City Manager Bob Cowell.  “After receiving well over 100 applications and interviewing six highly qualified professionals, I feel very fortunate to have found someone of Clarence’s caliber, available and interested in joining our team.  Clarence’s long tenure in public service, deep understanding of public budgeting and financing, and stellar reputation helped him stand out above all the other candidates.  I am thrilled we were able to secure someone who I believe will serve the residents of Roanoke well for many years, just as Sherman has done all these past years.”

“I am excited and truly honored to be provided the opportunity to return to the Star City where my career began and serve the citizens of the City of Roanoke. Roanoke is very dear to me both personally and professionally,” said Clarence Grier.