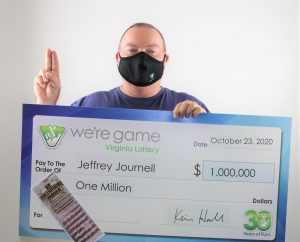 NEWS RELEASE: When Jeff Journell just happened to be near A-1 Food Mart on South Jefferson Street in Roanoke, so he stopped in and bought a Millionaire Maker ticket from the Virginia Lottery. You might say that was a million-dollar decision.

When he scratched the ticket, he discovered he’d won the game’s $1 million top prize.

“We were high-fiving in the store,” he later told Lottery officials. “I’ve always wondered what it would feel like, and it felt wonderful!”

The Roanoke man had the choice of taking the full $1 million in annual payments over 30 years or a one-time cash option of $601,684 before taxes. He chose the cash option. The store receives a $10,000 bonus from the Virginia Lottery for selling the winning ticket.

Mr. Journell, who is retired, said he has no immediate plans for his winnings.