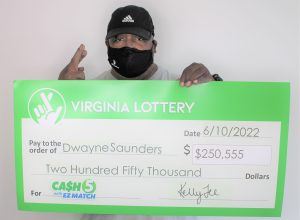 It all happened when he bought a ticket for Virginia Lottery’s Cash 5 with EZ Match game at the Food Lion on Wildwood Road in Salem. He used Easy Pick and allowed the computer to randomly select the numbers on his ticket.

When the numbers were drawn for the June 10 drawing, he matched all five to win the jackpot!

Cash 5 with EZ Match features a rolling jackpot, starting at a minimum of $100,000. If nobody matches all five winning numbers, the jackpot increases for the next drawing. The odds of matching all five numbers to win the jackpot are 1 in 749,398. For more information on how to play Cash 5 with EZ Match, visitvalottery.com/Cash5.

In addition, a player who spends an extra dollar for EZ Match receives five randomly generated numbers with a prize of up to $500 associated with each number. If those numbers match any of the numbers on the ticket for the drawing, the player wins that prize – even before the drawing is held.

Mr. Saunders said the winnings will come in handy because he hopes to retire within the next few years.