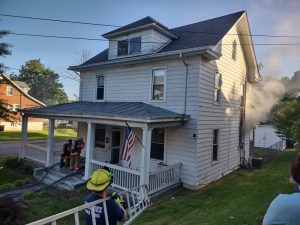 Firefighters rescued a dog Monday evening from a burning home in southeast Roanoke. Crews arrived to find smoke coming from the two-story home in the 1000 block of 15th Street. They quickly put out the flames which started in the kitchen and caused an estimated $45,000 in  damage; there is no word yet on the cause. City fire officials say the dog appears to be unharmed.

NEWS RELEASE: On Monday, May 9, shortly after 7 p.m., Roanoke Fire-EMS was dispatched to the 1000 block of 15th Street in southeast Roanoke for a reported structure fire. Crews arrived to find smoke showing from a two-story residential structure and marked it a working fire. The fire, which started in the kitchen, was quickly extinguished. Crews removed one dog from the home, which appeared unharmed. Damages to the home and contents are estimated at $45,000. The cause of the fire is under investigation.