The City of Roanoke’s Division 6 Swift Water Rescue Team will be recognized this weekend for their work during last July’s flooding. 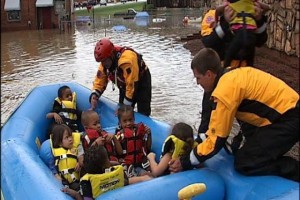 Roanoke, VA – Roanoke Fire-EMS has received notification that they are receiving the 2013 Governor’s Award for Outstanding Fire Department Response.

On two occasions during 2013 (July 3rd and July 10th, respectively) the City of Roanoke’s Division 6 Swift Water Rescue Team’s skills were put to test in various efforts to assist residents trapped in vehicles and buildings following flash flooding. Efforts in both areas were focused around removing persons who were trapped due to rapidly rising flood waters. Over the course of a week, members of the Roanoke Fire-EMS Departments Swift Water Rescue Team rescued over 50 people from imminent danger.

Members of the team as well as the Office of the Chief will accept the award during the opening ceremonies of the Virginia Fire & Rescue Conference in Virginia Beach on Saturday, February 22, 2014.