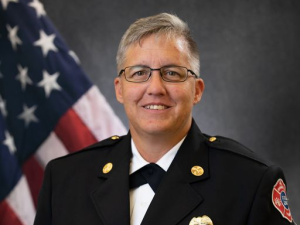 NEWS RELEASE: Roanoke Fire-EMS is pleased to announce that Rebecca “Becky” Smith has been appointed to the position of Fire Marshal/Battalion Chief of Fire Prevention. Chief Smith has served Roanoke Fire-EMS for almost 19 years, beginning as a firefighter/EMT in 2003. In 2007, she became a certified fire investigator for the department, and a fire inspector in 2010. Smith was promoted to Assistant Fire Marshal in 2019, and was promoted to Deputy Fire Marshal in 2021. In addition to her service with Roanoke Fire-EMS, she worked for Franklin County Public Safety as a firefighter/EMT and fire investigator from 2008 to 2019, and she has served on the staff of the Virginia Fire Officer Academy since 2015. Smith is a graduate of the Virginia Fire Marshal Academy Fire Marshal Law Enforcement School, the Virginia Fire Officers’ Academy, and she holds an Executive Certificate in Leadership from the Hollins University Batten Leadership Institute.

“We have full confidence that Chief Smith is the right choice to continue to advance the growth of the Fire Marshal’s Office,” says Roanoke Fire-EMS Deputy Chief David Guynn. The first female to hold the position of fire marshal in Roanoke Fire-EMS history, Smith is dedicated to serving her department and her community. Please join the City of Roanoke Fire-EMS Department in congratulating Battalion Chief Becky Smith on this promotion.