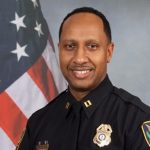 Brooklyn-born and a former Marine, Sam Roman Jr. is now the Chief of Police in Roanoke City. He’s been on the force for more than two decades, with a stint as Lexington’s Chief of Police sandwiched in between. Retaining and recruiting police officers is a concern; Chief Roman discussed that in-studio with WFIR’s Gene Marrano, on this “Longer Listen” segment: