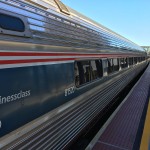 State transportation officials say Roanoke Amtrak ridership for the first six months has been impressive — and an obvious boost to the train that heads to Washington and beyond. It helped increase ridership on what had previously been the train to Lynchburg by more than 8% from the same time year before, this at a time when the Amtrak numbers are down a bit both nationwide and in Virginia. WFIR’s Evan Jones has the story: