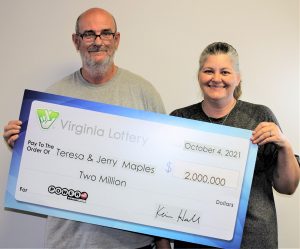 A road trip lottery purchase sure paid off for a North Carolina couple traveling through the region. Jerry and Teresa Maples bought a Powerball ticket at a Christiansburg convenience store in late September. It matched the first five numbers drawn, good for a $2 million prize, and the couple recently returned to Virginia to claim their winnings.

NEWS RELEASE: Jerry and Teresa Maples had been traveling through 11 states, and in each state, they bought a couple of Lottery tickets. That’s how they happened to buy a Powerball ticket at the Stop In Food Store at 2375 Roanoke Street in Christiansburg. That ticket ended up being a $2 million winner! “It still doesn’t feel real yet!” Ms. Maples told Virginia Lottery officials as they claimed their prize.

The Hamlet, NC, couple matched the first five numbers in the September 27 drawing. The only number they didn’t match was the Powerball number. Normally, that wins Powerball’s second prize of $1 million. However, they spent an extra dollar for Power Play when they bought the ticket. That extra buck doubled the prize to $2 million.

The winning numbers for that drawing were 21-22-39-44-60, and the Powerball number was 12. They used Easy Pick and allowed the computer to randomly select the numbers on their ticket. If they had matched all six numbers, they would have won a jackpot estimated at $545 million. Their ticket was the only one in the nation to match the first five numbers.