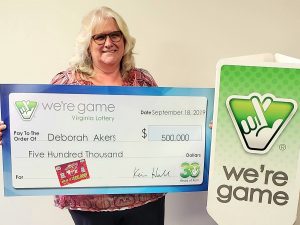 A Richmond-area woman is presumably quite happy she stopped at a Troutville convenience store just off I-81. Deborah Akers was driving home from Christiansburg when she purchased a Virginia Lottery scratcher ticket that was good for $500,000. It is one of the top prizes in the “Super 5s” game.

NEWS RELEASE: Deborah Akers was driving from Christiansburg to the Richmond area where she lives. She stopped at Brughs Mill Country Store at 345 Brughs Mill Road in Fincastle. “I had a $40 winning ticket, so I cashed it in,” she said. She used her winnings to buy four more tickets, including a Super 5s ticket. Hours later, sitting at home watching TV, she pulled out the tickets and began scratching. That’s when she discovered one of her tickets was worth $500,000. “There’s no way! There’s no way!” she later recalled thinking. “I just won half a million!”

Ms. Akers, who is a paramedic, said she plans to pay bills with her winnings and invest the rest.