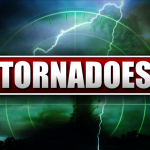 RICHMOND, Va. (AP) _ The National Weather Service has confirmed that the remnants of Hurricane Florence spawned a total of six tornadoes in Virginia earlier this week. Five of the tornadoes on Monday were spread across the Richmond metro area. A sixth tornado hit Mecklenburg County, near the North Carolina border, the same day. Media outlets report that teams from the National Weather Service in Wakefield, Virginia, surveyed damage from the storms Tuesday and confirmed the number at 6. The strongest tornado levelled a flooring company in Chesterfield, killing a man who worked there. That storm was categorized as an EF2 hurricane, packing winds of 120 miles per hour.