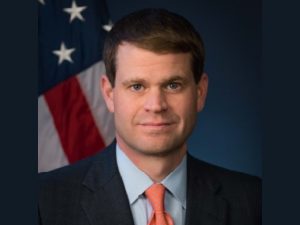 Photo: US Dept of Justice

The region’s top federal prosecutor is resigning from his position to become a federal judge. U.S. Attorney Thomas Cullen has held the position for about two-and-a-half years. The announcement came after the U.S. Senate confirmed President Trump’s nomination  of Cullen to become a federal judge for the Western District of Virginia. Cullen’s successor as U.S. Attorney has not yet been named.

NEWS RELEASE: ROANOKE, VIRGINIA. – U.S. Attorney Thomas T. Cullen announced today that he is resigning from the Department of Justice, effective Tuesday, September 15, at 12:00 p.m.   Cullen, 43, who has served as U.S. Attorney for the Western District of Virginia since March 30, 2018, made this announcement following his Senate confirmation to become a U.S. District Judge in the Western District of Virginia.

“U.S. Attorney Thomas Cullen has served the Department of Justice and the citizens of the Western District of Virginia with honor and distinction,” U.S. Attorney General William P. Barr said today.  “During his tenure, the office made meaningful strides towards reducing violent crime, mitigating the opioid epidemic, and increasing cooperation among federal, state, and local law-enforcement agencies.  As he moves into his new role as a federal district judge, I am confident that he will remain steadfast in his commitment to equal justice and the rule of law.”

“Serving as U.S. Attorney has been the highlight of my career,” Cullen stated today.  “I am enormously proud of the dedicated public servants in this office and the work that they—along with our many brave law-enforcement partners—do to protect the public.”

Under Cullen’s leadership, the U.S. Attorney’s Office focused on implementing the Attorney General’s priorities of combatting violent crime and the opioid epidemic.  He also personally directed the federal civil rights prosecutions stemming from the August 2017 “Unite the Right” rally in Charlottesville.

As part of the national Project Safe Neighborhoods (PSN) program, Cullen and the prosecutors in his office have worked closely with federal, state, and local law enforcement in the Roanoke Valley, the Danville-Pittsylvania County region, and the greater Lynchburg area to identify individuals and groups responsible for committing violent, firearms, gang-related, and serious drug offenses and prosecute them in federal court.  These coordinated efforts led to a significant increase in the number of defendants prosecuted by the U.S. Attorney’s Office, from 267 in fiscal year 2018, to 410 in 2019 (a 54 percent increase overall), and contributed to a substantial decrease in the rate of violent crime in Danville over a similar time period.

U.S. Attorney Cullen also directed a multifaceted federal response to the opioid epidemic that has ravaged the region over the past several years.  His prosecutors have obtained convictions of over a dozen physicians and other health-care providers for the unlawful distribution of controlled substances and related criminal conduct.  The office also has secured convictions and civil settlements against numerous corporate entities engaged in the unlawful distribution of controlled substances.  In recognition of this hard work and the office’s long track record of success in prosecuting corrupt medical providers, Attorney General William P. Barr, in April 2019, announced that he would expand DOJ’s Appalachian Regional Prescription Opioid Strike Force (ARPO) to the Western District of Virginia.  The ARPO Strike Force is composed of prosecutors and data analysts from DOJ’s Health Care Fraud Unit who deploy to participating districts to support the prosecution of individuals and organizations engaged in the unlawful distribution of opioids.  With these additional investigative resources, the U.S. Attorney’s Office has been able to increase the number of prosecutions in this critical area.

In addition to its enforcement efforts, the U.S. Attorney’s Office, under Cullen’s leadership, has productively collaborated with local community groups and treatment advocates on effective opioid prevention and recovery initiatives.  In late 2018, U.S. Attorney Cullen convened a meeting with leaders from Carilion Clinic in Roanoke and public-health officials from Buffalo, NY, to discuss “Buffalo Matters,” a community-based program designed to aid patients with opioid-use disorder through rapid referrals from emergency rooms to community-based clinics upon discharge.  As a result of this meeting and Carilion’s commitment to implementing the Buffalo Matters model, Roanoke Memorial Hospital has made significant progress in directing opioid-use disorder patients to treatment programs and, in turn, significantly reducing the number of ER visits.  The office also recently announced the formation of a Heroin Education Action Team (HEAT), a partnership between the U.S. Attorney’s office and families who have lost love ones to opioid overdose.  Once in-person classroom instruction resumes, the HEAT team will deploy to school districts around the region and speak to students and their families about the dangers and tragedies associated with opioid use.  Cullen was also proud to partner with Chief U.S. District Judge Michael F. Urbanski and the federal public defender to launch a federal drug-treatment court, one of only a handful of federal drug courts nationwide.

Cullen also devoted a significant amount of his time to the “Unite the Right” prosecutions.  In July 2019, his prosecution team obtained a life sentence for James Fields Jr., who perpetrated an act of domestic terrorism in Charlottesville that killed 32-year-old Heather Heyer and seriously injured over 30 peaceful protestors.  They also successfully prosecuted several members of the militant white-supremacist group the Rise Above Movement (RAM), who traveled from California and committed numerous acts of violence.  He and his team also convicted an avowed white supremacist on civil rights and cyberstalking charges for threatening a prospective candidate for the Charlottesville City Council and the minor autistic daughter of a community activist.  Cullen, who served on DOJ’s Domestic Terrorism Executive Committee while U.S. Attorney, was particularly outspoken about the alarming rise of violence by white supremacists in the United States.

In addition to these successful prosecutions, the office’s civil division has significantly increased its efforts in the areas of civil fraud enforcement and federal debt collection.  In April 2020, the division announced a landmark $5 million settlement with a group of 24 coal companies owned and operated by the family of West Virginia Governor Jim Justice for unpaid violations of the Federal Mine Safety and Health Act.  The division’s newly reconstituted affirmative civil enforcement (ACE) group has also successfully assessed monetary penalties against medical professionals, hospitals, and pharmacies for violations of the Controlled Substances Act and health-care fraud.

As U.S. Attorney, Cullen widely traveled the district to meet with his federal, state, and local law-enforcement counterparts.  He visited over 50 local commonwealth’s attorneys’ offices during his tenure and met with scores of local sheriffs, police chiefs, and other community officials.  Several of his key law-enforcement partners reacted to today’s announcement:

“Over the last several years, Thomas Cullen and the office he runs have provided the type of law enforcement leadership that has made Americans in general, and Virginians in particular, safer,” said David W. Archey, Special Agent in Charge of the FBI’s Richmond Division. “Mr. Cullen is a true partner to the FBI and a professional. He is aggressive though not a zealot, he seeks just outcomes, and he executes his authority with humility. Each of these qualities will continue to serve our country and our Commonwealth well from the Bench.”

“I congratulate U.S. Attorney Cullen on his appointment to the Federal bench and thank him for his steadfast support to both myself and the ATF Washington Field Division,” said Ashan M. Benedict, Special Agent in Charge of ATF’s Washington Field Division. “Working together, we successfully coordinated the investigation and prosecution of an ever-increasing number of criminal cases within the Western District of Virginia – a testament to our mutual commitment to public safety and the rule of law.  I wish Thomas all the best as he continues his distinguished career in public service.”

“In 2016 and 2017, the City of Danville, Virginia, was experiencing an extreme surge in violent crime, specifically gang related violent crime.  Homicides and shootings were becoming a regular occurrence, and our community was suffering.  In 2018, working with the Office of the United States Attorney for the Western District of Virginia, under the leadership of Thomas Cullen, we were able to effectively prosecute several high-ranking gang members for these violent crimes, as a result, our community is now a much safer place,” said Danville Police Chief Scott C. Booth. “In 2019, our community experienced a 31 percent reduction in homicides, a 42 percent reduction in aggravated assaults, and a 63 percent reduction in robberies.  Danville is a much safer place now because of Thomas Cullen and his leadership. Danville Police Department’s efforts including the implementation of Project Safe Neighborhoods have resulted in drops in every violent crime category from 2018 to 2019.”

“I would like to offer my congratulations to Mr. Cullen on his confirmation as a federal judge.    During his time as U.S. Attorney, Mr. Cullen has worked closely with local law enforcement to ensure that those people who victimize our citizens are brought to justice,” said Roanoke County Police Chief Howard B. Hall. “His contributions to our regional efforts have led to the successful conclusion of numerous significant investigations.  He has been a great partner.  While we will miss him locally, I am confident that he will make great contributions to our criminal justice system as a judge.”

“My staff and I have had the opportunity to work with Mr. Cullen in his capacity as the U.S. Attorney for the Western District of Virginia.  Our region, like many other communities in the country, has been plagued by heroin trafficking and the devastation that it has on families,” said Shenandoah County Sheriff Timothy Carter. “As the U.S. Attorney, Mr. Cullen has been extremely sensitive to this devastation, and has worked hard to bring federal resources to bear, making a local impact in both enforcement for traffickers, and treatment for those addicted.  Mr. Cullen is straight-forward, honest, and practical.  He has a temperament and organizational skills to be a solid member of the federal judiciary.  He makes sound and lawful decisions.”

“It has been a true pleasure working with U. S. Attorney Thomas Cullen these past 2 years.  He was highly responsive and open to discuss partnerships that furthered community safety in Lynchburg,” said Bethany Harrison, Commonwealth’s Attorney for the City of Lynchburg. “It is no surprise to me that he was confirmed for a Federal Judgeship.  We will miss him terribly and wish him the best in his new endeavor.”