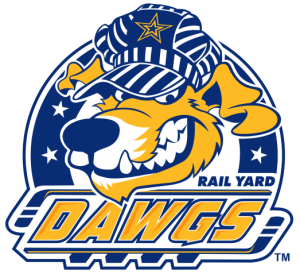 HUNTSVILLE, AL. – The Rail Yard Dawgs advanced to the President’s Cup Final for the first time in franchise history, sweeping the Huntsville Havoc with a 2-0 Game Two win in  the President’s Cup semifinals on Saturday night. Austyn Roudebush had a 36-save shutout, while Brady Heppner and Nick Ford scored for the  Dawgs..

The Dawgs and Havoc somewhat switched roles in the opening period, with Huntsville being the more physical side while Roanoke was the more finesse offense. Huntsville outshot Roanoke 14-12 in the frame, but the period ended scoreless.

Roanoke opened the scoring at 4:20 in the second period, as Heppner muscled a shot from the far-side goal line through Huntsville’s Hunter Vorva, giving the Dawgs the 1-0 lead. Matt O’Dea was credited with the assist. The Dawgs held off a slew of shots by the Havoc, who outshot Roanoke 14-3 in the period, and the Dawgs entered the second intermission with a slim lead.

The third period was tightly-contested, with both teams needing huge saves by Roudebush and Vorva to keep the score at 1-0. Finally, Gehrett Sargis took a pass from Bryce Martin right towards Vorva’s net, and Ford finished off the rebound after the initial save. The Dawgs killed off a late penalty and maintained the shutout in the closing moments, sealing the franchise’s first-ever appearance in the President’s Cup Final.

The Rail Yard Dawgs will travel for Game One and Two against the Peoria Riverman, and will play on Thursday and Friday night at 8:15 p.m. EST. Roanoke will then host Peoria for Game Three at 7:05 p.m. on Monday, May 2, and will host Game Four if necessary at the same time on the following Tuesday. If necessary, Game Five will be back in Peoria on Thursday, May 5, at 8:15 p.m. EST. Tickets for Game Three will be available online at 10:00 a.m. EST tomorrow morning, and at Berglund Center box office on Monday. You can watch the games on the Haley Toyota Rail Yard Dawgs Hockey Network on HockeyTV, or listen via Mixlr. The 2022 President’s Cup Playoff run for the Dawgs is sponsored by Haley Toyota.