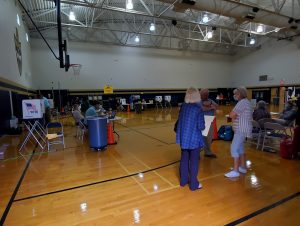 Those who are going out to vote in Roanoke County today for the Republican U.S. Senate primary seem to be finding their way to the 5 “super precinct” sites that were put in place instead of the typical and more numerous neighborhood precincts. So says Ken Srpan, chair of the Roanoke County electoral board:

Srpan says COVID-19 meant fewer poll worker volunteers – who are often older – and that led to the consolidated Super Precinct concept, which is being called a one-time only option. He says turnout is light, as was expected.