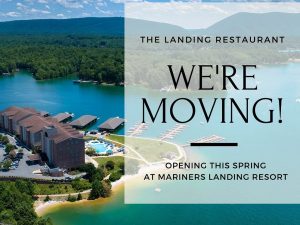 A popular Smith Mountain Lake restaurant is changing locations. The Landing is moving across the lake from its long-time spot at Bernard’s Landing to Mariner’s Landing Resort. Owners hope to open at their new location by early May.

Long-time lake residents Bruno and Tiffany Silva own the award-winning restaurant and have operated at Bernard’s Landing for the past 16 years.

The Landing Restaurant will retain its name and operate out of the waterfront restaurant located at The Pointe at Mariners Landing. The venue, which will be open to the public and accessible by boat or car, boasts extensive indoor and outdoor seating with spectacular views of the lake and Smith Mountain. An opening date has not been set but Tiffany Silva said they hope to be operational by May 1.

Long-time real estate developer Waller Perrow began reshaping Mariners Landing, a 1,000-acre golf and lake community, with partner Tom Branch last year. According to Perrow, in addition to relocating The Landing, the Silvas will oversee all catering and special events at the resort, will establish a new private restaurant at the golf clubhouse called Bruno’s and operate a seasonal poolside eatery called Chubby’s.

“The wine shop will be open to the public and will feature wine and craft beer, a gourmet market with grab-and-go food items, and gifts,” said Tiffany Silva, noting that she’s also working to organize a weekly farmer’s market starting in the spring.

“Bruno and I have cherished our time as part of the Bernard’s Landing community, but are excited about expanding our brand and our business offerings significantly by moving to Mariners Landing,” Silva said. “We are thrilled with the new direction the resort is heading, and this is an exciting opportunity for us, our family and our staff.”

Perrow said: “Bruno and Tiffany are uniquely qualified to direct the current and future food and beverage offerings at Mariners Landing. They are experienced, professional, and have a comprehensive knowledge of the Smith Mountain Lake market in terms of dining, catering and overall coordination of special events such as weddings and conferences. We couldn’t be more excited about the partnership.”

Initially, while Virginia’s COVID restrictions remain in place, Silva said service will be limited to takeout and dockside delivery.

“At the new location, customers can expect the same level of service and dining experience they’re accustomed to,” she said. “We look forward to seeing many familiar faces, and we’re also excited about getting to know the Mariners Landing community, and sharing our unique culinary experiences with them. Providing dining and retail options to the more than 500,000 people who visit the nearby Smith Mountain Lake State Park each year is something we are really excited about, as well.”

The Silvas are working closely with Perrow on Bruno’s, the new private restaurant at the golf course clubhouse. Silva said the venue will serve fresh, casual fare, including salads, sandwiches and gourmet pizzas. Takeout will be available to the public.

Significant renovations are expected to be completed in time for a scheduled opening in early June, she said. Until then, Bruno’s GastroTruck will offer food and beverages to golfers, property owners, club members, and overnight resort guests starting in the spring.

Silva said Mariners Landing also will become the home base for The Landing Love Project, a non-profit that delivers hundreds of nourishing meals each week to families and seniors in the SML region struggling with food insecurity. The organization, which also focuses on literacy, was created during the onset of the pandemic in early 2020.

“To date, with the help of our community, we’ve delivered more than 44,000 meals to families in Bedford and Franklin counties,” Silva said. “Bruno and I can’t stress enough that moving our operations to Mariners Landing will allow us to streamline the processes and expand these critical community services.”

Perrow and the Silvas are discussing the creation of a hospitality workforce development program to assist with the expansion of services and create additional jobs in the region.

“This is another key component in our goals with The Landing Love Project, which would be such a benefit for those in our community,” Silva said.

Perrow added, “The vision is to provide training with a career path and future opportunities. It also will assist our goal of bringing additional jobs to the Smith Mountain Lake region.”