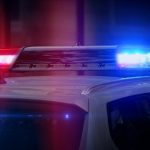 UPDATE: Police in Giles County say a woman abducted yesterday in the town of Rich Creek,was found safe and a suspect is in custody. Officials say a tip helped police locate the woman, who sustained minor injuries, in Monroe County, West Virginia yesterday. The suspect has been charged with abduction and malicious wounding.

PREVIOUS: Police in Giles County say a woman was abducted today in the town of Rich Creek, and witnesses say she suffered noticeable head and face injuries in the incident. Officials say it happened this afternoon;  the abductor is described as an older white male who drove off with the victim in a maroon SUV and headed toward nearby West Virginia.

FROM RICH CREEK POLICE:  The RCPD and Giles Sheriffs Office is investigating an incident that occurred at approximately 1:10 PM on today’s date. A unidentified female was reported to have been abducted from the area of Pizza Plus in Rich Creek. The suspect vehicle is a maroon SUV, possibly a GMC or Chevrolet with a tag containing the numbers 0099. The tag possibly also had the letters PA on the left or the tag but not part of the tag number. The vehicle was driven by an older white male with Gray hair. The victim is described as early 20s with short brown hair, jeans and a fur coat. The victim sustained noticeable injuries to her head and face during the incident, according to witnesses. If anyone sees this vehicle or has any information, please contact 911 immediately. Last known direction of travel is 460 West Bound towards Mercer County.