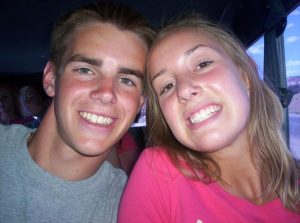 A newly-revamped task force is now at work in efforts to find whoever killed Virginia Tech students Heidi Childs and David Metzler almost 10 years ago. The two were high school sweethearts from the Lynchburg area, and they were found murdered at a National Forest Service recreation area parking lot. Police say they will take another look at all the evidence collected to this point, and they hope that this and new technology – like DNA evidence – will lead to arrests. Montgomery County Sheriff Hank Partin:

Also announced today: the reward fund has grown to $100,000 for information that leads to an arrest for the murders. Lieutenant Colonel Timothy Lyon heads the State Police Bureau of Criminal Investigation:

At today’s news conference, police said there are people out there who know what happened and who committed the murders, and they urged those people to come forward so the Childs and Metzler families can find peace in their lives.