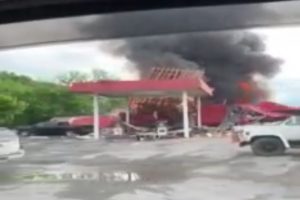 BUENA VISTA, Va. (AP) _ Virginia State Police are looking into a fuel distributor as they investigate a gas station explosion that killed four people and injured three others. The Roanoke Times reports that search warrants have sought information about a gasoline order, delivered to South River Market less than an hour before the explosion on May 10. Investigators requested records on the distributor’s truck driver, as well as business, phone and company training documents. Officers said they hoped to determine if the driver had adequate safety training and knew how to act in case of an accident. The market was totally consumed by flames in the May blaze. Investigators found four bodies in the rubble, but said they didn’t think the fire was suspicious. The driver has not been charged.