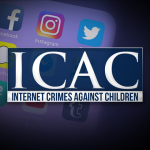 State Police say a Roanoke man coordinated a private on-line chat room that adults used to communicate with numerous minors, although the exact number is unknown. 35-year-old Jarrett Henshaw is charged with soliciting a minor on line. But police say it may go well beyond that, and they ask anyone who has information on Henshaw, the chat room, or any possible victims to contact them at novadcicac@vsp.virginia.gov.

From State Police: A Roanoke man faces multiple charges after being arrested by a Virginia State Police special agent assigned to the Northern Virginia – Washington D.C. Internet Crimes Against Children (ICAC) Task Force. Jarett D. Henshaw, 35, of Roanoke, Va., was arrested on March 27, 2018, on three felony counts of online solicitation of a minor in Rockingham County. Henshaw has been released on bond. The charges stem from an undercover, online operation during which Henshaw solicited the ICAC Task Force investigator. The ICAC Task Force special agent’s investigative, online profile was that of an underage female. Through the course of the investigation, Henshaw has been identified as the coordinator of a private, online chat room that has engaged with numerous unknown minors. As a result, the Virginia State Police is encouraging anyone with information concerning Henshaw, the chat room, and/or any victims to contact the ICAC Task Force by email at novadcicac@vsp.virginia.gov The NOVA-DC ICAC Task Force was established in November 2004 through a grant from the US Department of Justice, Office of Juvenile Justice and Delinquency Protection. With Virginia State Police serving as the coordinating agency, the Task Force consists of 52 local, state and federal law enforcement agencies within the Commonwealth. For more information on the Task Force, click on www.novadcicac.org.