Police: another report of someone trying to lure children into white SUV

Roanoke County Police are now receiving more reports of someone attempting to lure children into a white SUV  — and police say the accounts are pretty similar.   The first report came from a six-year-old boy in the Hollins area Monday afternoon, and police say they have received another report since then. WFIR’s Evan Jones has the story.

(Continue reading for a larger photo and full information from Roanoke County Police.)

Roanoke County police want the public to be aware of a report received regarding an attempt by two men to abduct a child. The incident occurred at approximately 5:40 p.m. on Monday, October 1 along Peyton Street in the Summerdean subdivision in north Roanoke County.

The child’s grandfather reported the incident to authorities. He told police that two men in a white SUV attempted to lure his six-year-old grandson into their vehicle. The child refused to get in the SUV and went back to his grandfather’s house where he reported what had occurred. The grandfather then left his home in his own vehicle in an attempt to find the two men but was unsuccessful.

The two men in the SUV were described as white males in their mid-twenties – no further details regarding their appearance were available. Both men were wearing ball caps with some type of Indian logo on them. The white SUV was reported to have a trailer hitch.

If you have any information regarding this incident, please contact Roanoke County Detective K. Saul through the County Emergency Communications Center at 540-562-3265. 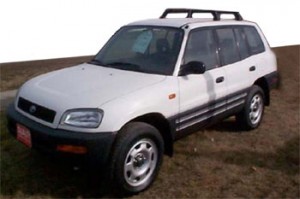 ROANOKE COUNTY, Va. (October 3, 2012) — The Roanoke County Police Department is currently investigating an Attempted Abduction of a young child that took place on October 1, 2012. The incident took place in the Northern area of Roanoke County.  The department is requesting assistance in locating a vehicle of interest.  The vehicle is described as a late 90’s model Toyota RAV4 white in color.  The vehicle may have dark tinted windows, along with a trailer hitch.   If you see the vehicle please note the vehicle license plate and immediately call 911 or contact the Roanoke County Police Department at (540) 562-3265.