Roanoke Police say two men held up the One Stop Market this afternoon Williamson Road — walking in, assaulting the clerk, then taking items from the store. The clerk required hospital treatment, but there is no immediate word on his identity or condition. Anyone with information regarding this or other crimes should call the Roanoke Police Department at 853-5959 or Crime Line at 344-8500. (Continue reading for a larger picture from the store surveillance video.)

Roanoke, VA- The Roanoke Police Department is investigating a business robbery that occurred on October 20, 2011.  Officers responded at 1:45 p.m. to the One Stop Market located in the 2200 block of Williamson Road.  The clerk stated that two suspects entered the business and assaulted him.  The suspects then took items from the store and fled.  The clerk was transported to Carilion Roanoke Memorial Hospital.  No arrests have been made. 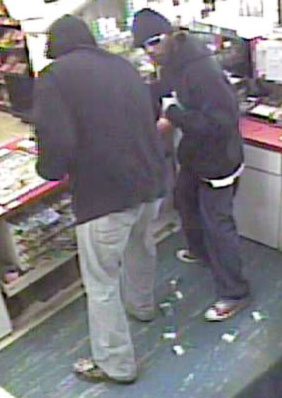 Anyone with information regarding this or other crimes should call the Roanoke Police Department at 853-5959 or Crime Line at 344-8500.  Crime Line may offer a monetary reward for any information leading to an arrest.